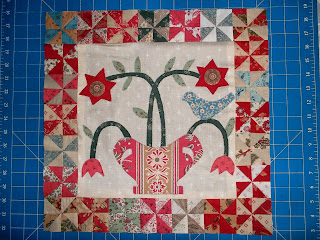 Here is my first centre with the pinwheel border attached.

This afternoon I will start the 2nd pieced border.

(You may notice I have extra pinwheels in my border. Somehow I cut them too small!!! I hope I can figure the maths to get the next round to fit!! Lol)
Posted by Miriam at 3:38 PM 8 comments:

A small finish, some progress and a fun Friday. 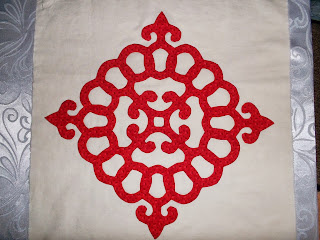 I have finished appliqueing Wanda's block.  Wanda has this design in her Blogger profile. (Click on her name to go to her blog) This is her own design and Wanda was kind enough to share it with me.  I love the intricacy of this design!

In the last few weeks I have joined 2 sew-alongs.

First is a Piecework Sampler by Cheri of Quilts By Cheri.

These are my blocks so far... 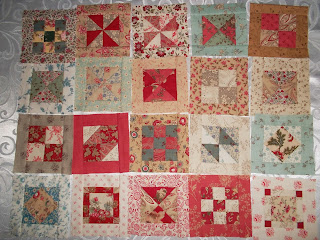 ...and some of my favourites.. 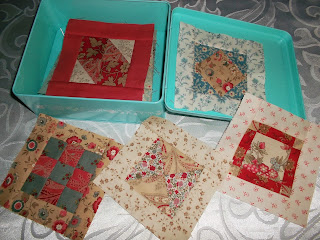 I have used all French General fabrics for this project. The next step will be to cut some more sashing and cornerstones and then stitch it all together.

The other machine project is Lori and Randy's Medallion Sew-along. I have made the pinwheel blocks for one of my centres. 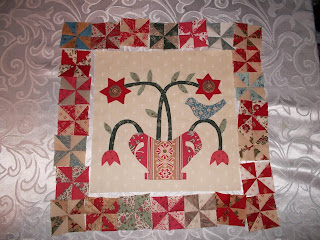 Well, maybe I should concentrate on one project at a time, because I cut all those pinwheels a bit too small!!! Each side has one extra pinwheel! Oooppps!!! I have decided I am not going to make them all again, so my block will end up a bit smaller than it should be. Hopefully I can fudge the blocks for the next step! Lol

Friday last week I joined Linda, Bev and more than 20 other ladies for an Antique Quilt Day. What a great day!!! Sharon brought her quilt!!!!

Sharon and I had our blocks with us so we laid them out on the quilt. Sharon's quilt was made in 1852 for her Great Great Grandmother's wedding. 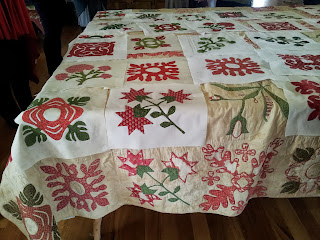 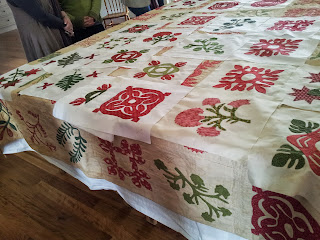 What an amazing sight to see our new blocks against the original quilt!!

Meredithe has lots more photos from the day on her blog.


I am making slow progress on Jacob's Coat.

It is another beautiful Autumn morning here in Melbourne. Its a little crisp at the moment, but it promises to be another lovely, sunny day.  I hope everyone has a wonderful day! :)

I have been busy working on lots of different projects recently. 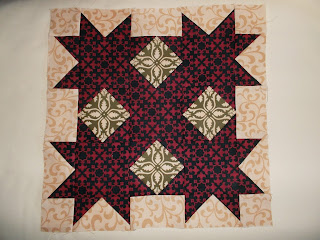 Only one more block to go now, then the sashing.

There is sooo much inspiration out there in blog-land at the moment that I have succumbed to the lure of 2 new projects. :)

I started another machine piecing project and joined in with Cheri's piecework sampler. Each day for the last 3 days Cheri has given instructions to make a different block. 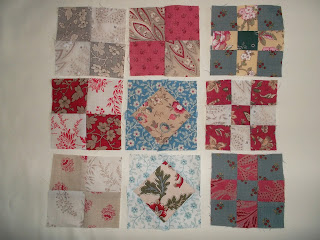 These are 3 1/2 inch (unfinished) blocks. These blocka are made with lots of french General fabrics. I am looking forward to the next blocks.

I also joined Lori and Randy's Applique Medallion sew-along. This time I am doing machine applique! It has been so long since I did any machine applique I can't remember just how long!! ( more than 20 years!)

Again I have chosen to use French General fabrics, and I have made 2 different centre blocks. ...and on  the second block I kept the same general shape of the vase, but did broderie perse. I haven't done broderie perse by machine before. 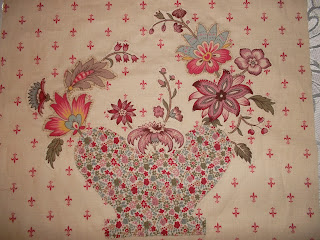 I used buttonhole stitch for both blocks.

Next week Randy will have the instructions for the beginning of the pieced borders, then Lori has another applique border.

Some progress has also been made on my current WIPs. 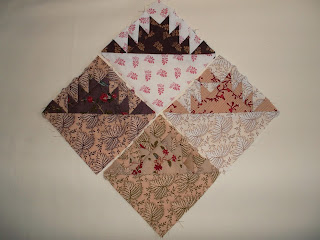 All the blocks are now pinned ready to be sewn down on Joseph's Coat. This is the final corner I pinned down 2 nights ago. 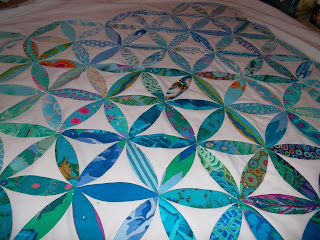 I have been slowly stitching on Wanda's applique block... 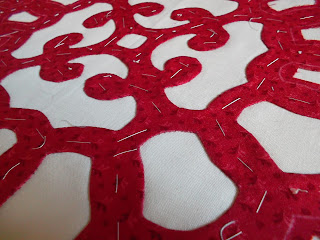 Now, I would like to share some of my daughter's work.
She made a wall hanging for her new home. 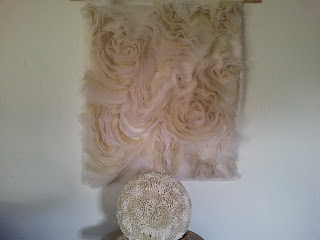 The fabric is more than 20 metres of silk organza of varying shades and qualities. 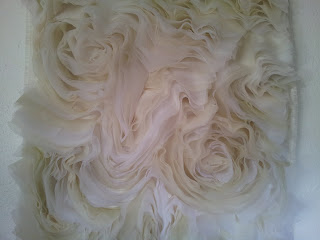 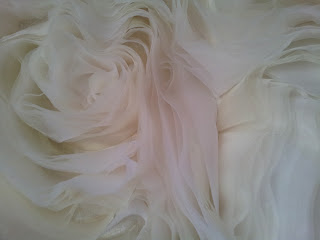 I took the photos with my phone and unfortunately the colours haven't shown true.

Last weekend we went for a drive down the west coast past Melbourne and along part of the Great Ocean Road. 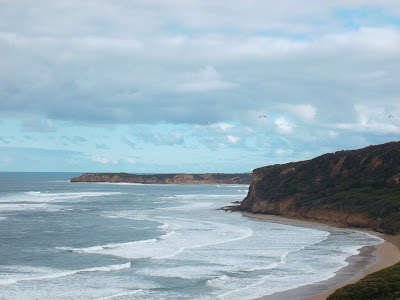 You may be able to make out some hang gliders in the photo above. There were about a dozen of them up at the same time. 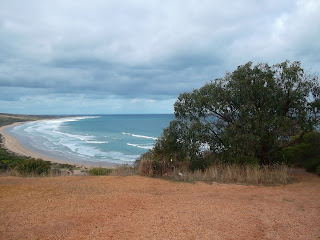 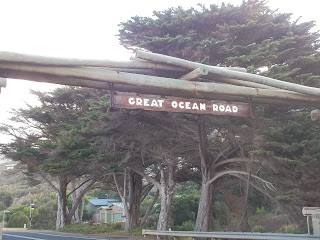 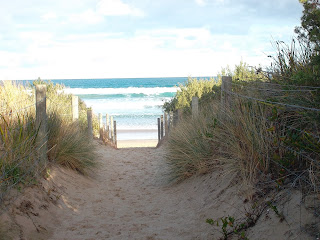 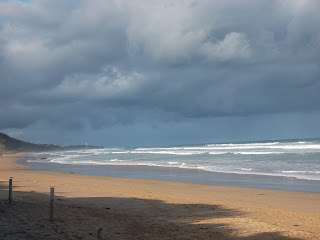 One several beaches there were surfers. Some beaches were much more popular than others. 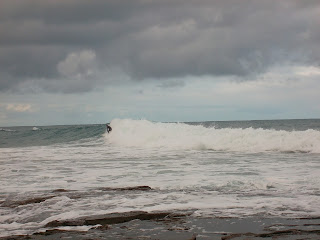 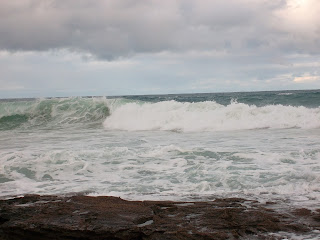 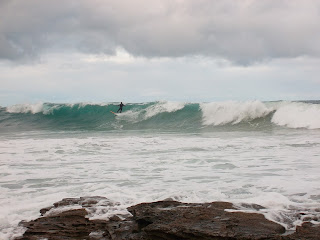 
The first day of May brings us the next block, block 10, of the CCC Quilt. This is Rachel Dickey's block. 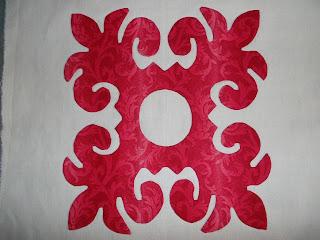 Please join me with Sharon on Sharon's blog as I make my very first guest blog post! :)

Miriam
I am a wife and Mum and an avid quilter. I love sewing, knitting, crochet, beading, smocking and learning any new techniques.